Back
,
Katherine Deck-Portillo
,
18
September
2019
Related topics
News
Our Team
San Antonio
Copy link to clipboard
The link has been copied to the clipboard
Share this Article
Print this Article 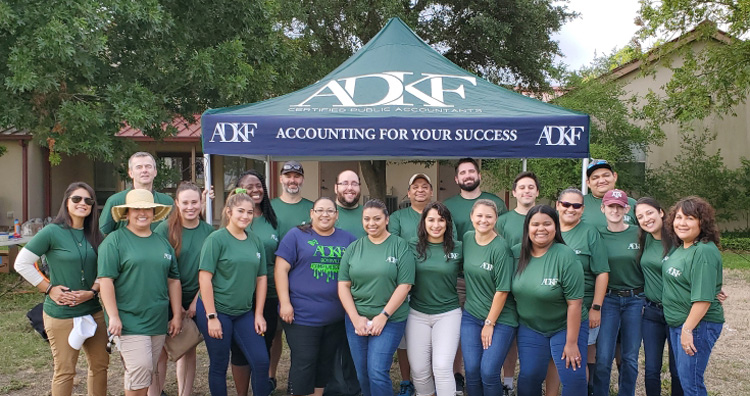 It’s not every day that accountants get to go to summer camp, but that is what ADKF has done for three years at Boysville’s Camp Wild Beast. One week a year, Boysville asks local companies to sponsor one day during the week Camp Wild Beast runs. This includes providing lunch and planning activities based on a given theme. It’s a labor-intensive volunteer activity that was taken on by ADKF’s volunteer committee, made up of Kelsie Burdett, Paula Heredia, and Veronica Hinojosa. This was a new role for them and they were to take on the challenge.

I loved being on the planning side because I got to help in making the decisions on how the event would be,” Paula commented. “it was a great feeling after the event, knowing that I got to play such a big role in making that day one that they would remember.

The three took to Pinterest as soon as they were told the theme was going to be Under the Sea. They explored ideas and modified them into something unique that each age group could enjoy. The children at Boysville range from five to fourteen years old. There was a classic field-day style activity – an intricate obstacle course the children enjoyed. Some of them would run through and ask to go again. It’s still a hot, Texas summer day, and inside was an arts and crafts table where the kids were able to design their own sea creature and then take a selfie in front of a large ocean mural.

Volunteering at Camp Wild Beast has become an integral part of creating the ADKF experience for staff by developing personal connections with clients and the community. The kids who are at Boysville have a story, and our staff’s goal was to create joyous memories for them. “It’s letting them know that people care. It’s not a duty, responsibility or job for me, but because I care – I want to be there,” Leila Rolike articulates the importance of the day.
Several of the volunteers reflected on their experiences.

For Maria Carillo, Audit Senior, it was about creating a one-on-one experience during the art and crafts session. “You can tell the kids that are more reserved. They can get lost in the midst of the excitement trying to get the kids set up and going,” she begins. “There was a little girl who was really quiet so I would make sure to offer her more paint colors or options so she can feel like someone was also paying attention to her. At the end, she ended up with two projects that she was able to complete.”

A group of staff members took a different approach through physical play. John Berryman, Audit Staff, explained that they had found a kickball while outside after completing an obstacle course session with a group of kids. Last year he had played for ADKF in a social kickball league and decided to share the joy.

“It turned into the ADKF guys and gals being in the field and the kids kicking. They would try to launch the ball, but it was bigger than some of them, so it was very difficult,” John described.

Cliff Peveto, Tax Staff, chuckled as he recalled the game, “Everyone took it easy, but John might have taken it more seriously.”

The day’s success could be measured by the joy staff members were able to provide at Camp Wild Beast. Caleb Janysek, Audit Senior, describes the ADKF sentiment as

We are local and are always going to be local. It’s nice to unplug, get outside, be active, and in this case bring some smiles to kids.