,
17
October
2019
Related topics
News
Our Team
Copy link to clipboard
The link has been copied to the clipboard
Share this Article
Print this Article 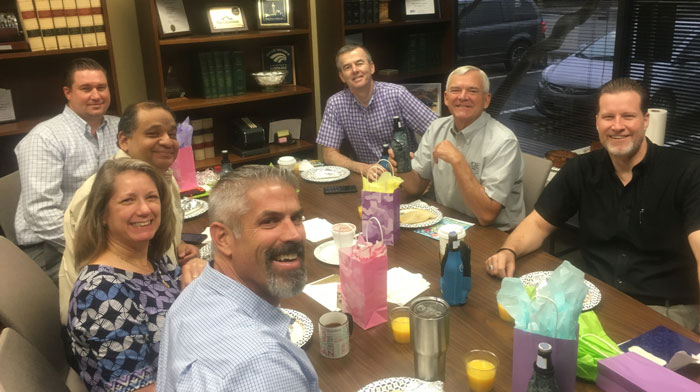 Lucky for the ADKF partners, National Boss’ Day is AFTER the October 15th deadline, so we always celebrate without distraction!  Annually, the ADKF Administrative Staff gather to celebrate the partner group and show their appreciation, by hosting a Partner Breakfast, complete with gifts.  Thank you to all the ADKF Bosses for all you do: Thomas Akin, David Doherty, Tyson Gaenzel, Rene Garcia, Joe Hernandez, Howard Klein, Scott Kopecky, Jason Nelson, and Susan Valdez.

You may be wondering how Boss’ Day came to be. Well, according to the National Today website, “In 1958, Patricia Bays Haroski registered National Boss’s Days as a holiday with the U.S. Chamber of Commerce in honor of her father, who was also her employer. She created the holiday to improve office relationships between supervisors and their employees as well as raise cognizance to all the hard work bosses put into their jobs. She felt as if younger employees didn’t appreciate their bosses enough and knowing firsthand what her father went through to make a company run smooth, set out to change that viewpoint. However, it wasn’t until Illinois Governor Otto Kerner supported Haroski’s registration four years later, that the day officially became a national holiday.”