,
08
December
2017
Related topics
News
In The Community
Copy link to clipboard
The link has been copied to the clipboard
Share this Article
Print this Article 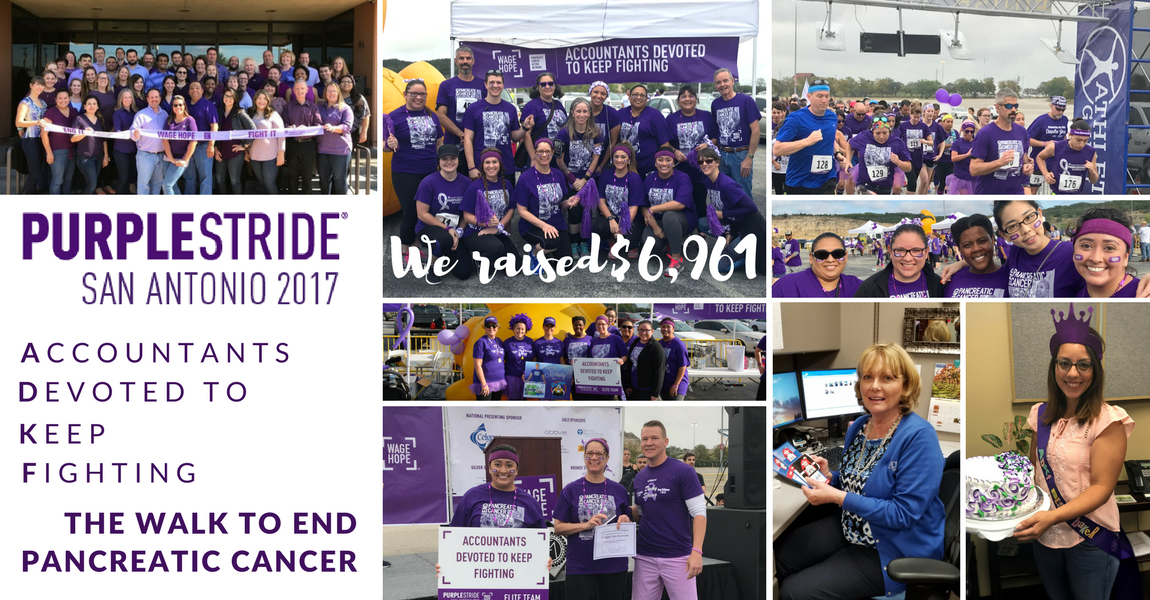 First, thank you to everyone who joined the fight against pancreatic cancer. Your action moves mountains for the thousands of families affected by this disease each year. Pancreatic cancer has the lowest survival rate of all major cancers, at just 9%. This deadly disease has stolen family members and loved ones from our ADKF team. As recently as this year, Debra Allen lost her husband Ray Allen in June. Audit Partner, Susan Valdez, lost her brother and sister after their individual battles of six months and 18 months after being diagnosed. Susan is participating in PurpleStride for her 5th year in a row. Our team kicked off our fundraising efforts by submitting team names. Jennifer Graham’s submission, “Accountant San Antonio Devoted to Keep Fighting” was chosen as the winning name. This year our fundraising committee was headed by: Kelly Boswell, Melanie Gamez, Nancy Meza, Anette Rocha, Susan Valdez, and Cristina Zalaznik. The volunteers from PurpleStride presented information about the disease and shared with us how our donation makes a difference. Just three hours after the presentation team ADKF raised over $1,000, which showed how inspired everyone was to take action. Our “Friday Jean Pass” fundraiser was also a hit with staff members who look forward to a casual Friday wardrobe during the fall. We also held an ADKF Bake Off, where Annette Rocha took the title of, “ADKF’s Best Baker.” Staff around the office sold snacks from their desk along with a firm wide bake sale to help us reach our goal. Debra Allen was awarded the overall top fundraiser for team ADKF and was in the top ten from PurpleStride San Antonio, she raised $1,324 for the cause. ADKF became and Elite Team and took 2nd place for fundraising, $6,961. This was the first year the PurpleStride 5K run/walk was held at Fiesta Texas which added a change of scenery and a few hills to the race. Tyson Gaenzel, Audit Partner, won 2nd place and improved on his maneuvering skills around the walkers. We couldn’t have asked for better weather and PurpleStride San Antonio reached its goal with the help of family and company teams. New Braunfels team, Ducky Strong, was the top fundraiser with $11,550. During the event, we were all moved to hear the story behind the teams and volunteers, met survivors and current cancer warriors, and felt empowered to continue the fight to end pancreatic cancer. We learned that pancreatic cancer does not have a test for early detection and when it usually is detected the cancer has already spread to other organs. Thank you again to everyone who helped coordinate and donated, your action speaks volumes. Also, special thanks to the San Antonio Pancreatic Cancer Action Network team who was extremely helpful in providing us with knowledge, swag, and support before and during race day. We fight for the more than 53,000 Americans who will be diagnosed with pancreatic cancer this year. Last year, this horrible disease surpassed breast cancer to become the third leading cause of cancer-related death in the U.S. If you are interested in joining the fight or would like information please visit: https://www.pancan.org/ Visit Accountants Devoted to Keep Finding Fundraising Page: http://support.pancan.org/goto/ADKF