,
30
June
2014
Related topics
Boerne
CPA Insights
In The Community
San Antonio
Copy link to clipboard
The link has been copied to the clipboard
Share this Article
Print this Article 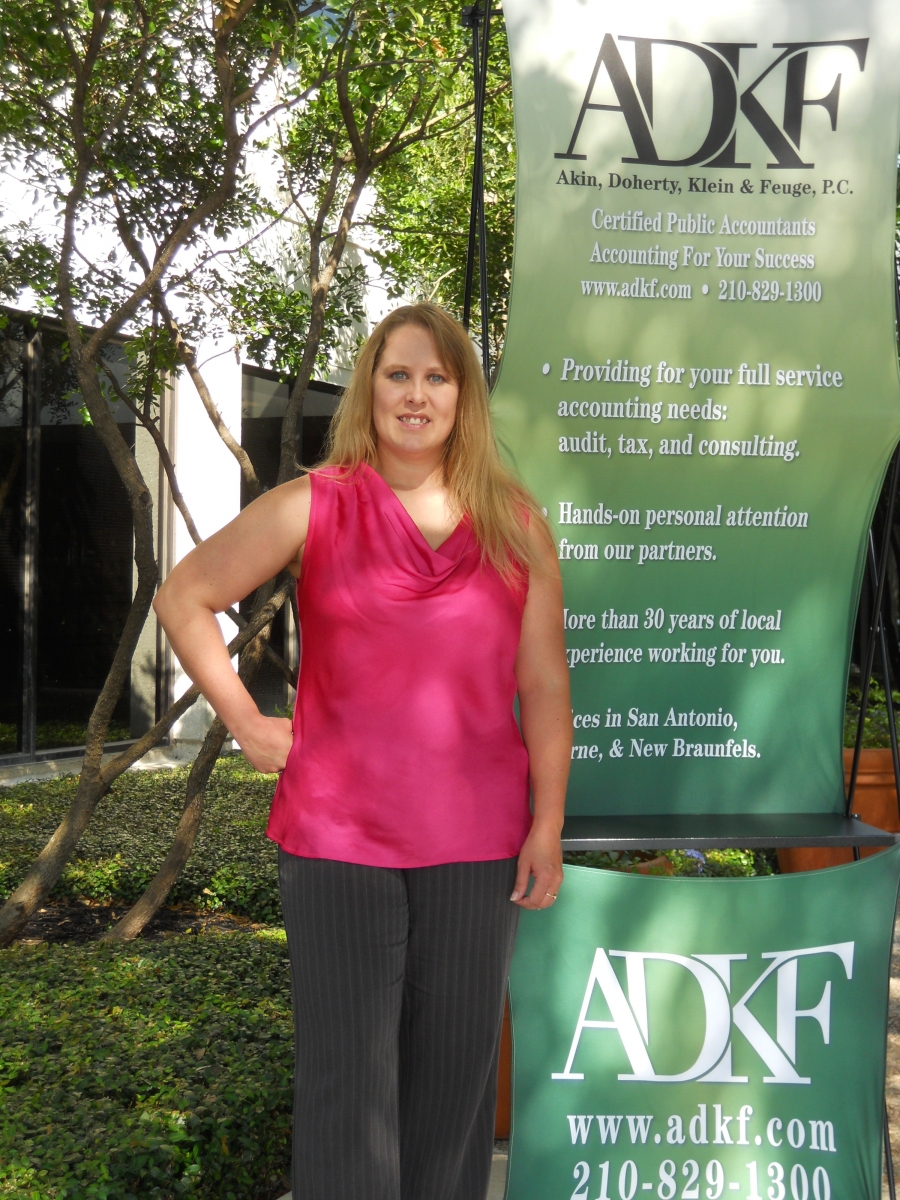 Congratulations to Valerie Brauner, ADKF CPA, who was Recognized by the San Antonio CPA Society! This monthly feature spotlights San Antonio CPA Society members, their career paths and advice they have for new and future CPAs. -Click Here for the Direct Link- This month, the spotlight shines on Valerie Brauner, CPA, Senior Tax Accountant, ADKF Certified Public Accountants How different can the same language be in two states – Nebraska and Texas? Well, when you talk to CPA Valerie Brauner, the answer is “could you spell that word, please?” Valerie is a Cornhusker through and through, having graduated from the University of Nebraska-Lincoln after growing up in a small town surrounded by corn and soybean fields. Summertime as a child meant working on a farm as a 1) bean buggy rider as a younger child and 2) a de-tassler as she got older. Apparently, a bean buggy (or is it buggie?) rides in a bucket seat on either end of a pole attached the front of a tractor, spraying the soybean plants with herbicides as the tractor drives through the field. De-tassling involves walking up and down rows of corn, pulling the tassles off of the plants, to promote cross-pollination. So you get the idea right away that Valerie, who is now a Senior Tax Accountant with ADKF Certified Public Accountants, loves to spend time outdoors. In fact, if she weren’t a CPA, she would more than likely be working with horses on a ranch, which has a lot to do with how she got to Texas in the first place. “A lot of folks (from Nebraska) move to Chicago or Denver after college, but I really liked Texas when I visited so I decided to move down here,” she reminisced. “I could also be closer to my sister – local lawyer Stephanie Chandler – and my nephews down here as well. And I enjoy being able to be outside so much of the year down here.” This self-described “nontraditional CPA” has had other interesting jobs along the way, as well. Originally an animal science major at Nebraska, she has been a meat cutter and bookkeeper for an equipment rental and retail company that supported the cell tower construction field. I chose accounting, because it was a good career path with lots of options.” Since receiving her CPA license three years ago, Valerie has been an active SACPAS volunteer, in addition to her work with the Boerne Chamber of Commerce and the Kendall County Fair Association. She is a graduate of SACPAS’ CPA Leadership Advantage program and TSCPA’s Leadership Development Institute. She was tapped as co-chair of the fledgling Young Accounting Professionals group two years ago and, for her efforts, was named a co-recipient of the SACPAS 2013 Young CPA of the Year Award. And for 2014-2015, she is serving as co-chair of the Member Involvement Committee. She has also volunteered with career awareness events, as well as Funlympics and Stuff the Van for Blue Santa community service projects. What is one interesting fact about you that may surprise people? “I like to hunt, especially deer hunting. Normally, I’m out in a blind on the first day of hunting season,” which works out well considering that hunting season begins just after the October 15 tax deadline. She also likes to sing, play softball and do cross-stitch, possibly because it’s counted cross-stitch. And the singing sometimes happens in public, as in karaoke or with a local country band. What is the most interesting thing you’ve ever done? “Well, I built a log cabin one time.” Her future home in Nebraska consisted of a lot of white cedar logs that had been hand-stripped plus an advisor from the New England company that shipped it. “It only took a day-and-a-half to get the first floor put together” with the help of almost 30 friends and family. The rest took a lot longer to put in place, but it was a very interesting learning experience for Valerie. “ I heard awhile back that it burned to the ground after I moved to Texas.” Who has inspired you the most? Valerie immediately lists the four biggest influences in her life, and then gives the reasons why: “First is God. Then my mother, who raised four children as a single parent, for showing me how to be a great single mom and encouraging me along the way. Next is my sister, for inspiring me to be the best I can be and proving that anything’s possible. And finally, the partners here at ADKF, for providing a great work environment…work/life balance while leading with Christian values and integrity.” Do you have any advice for people who are just beginning their careers? “Keep your options open. There’s more to this profession than just public accounting, so find the right fit for you and don’t get pigeon-holed into one place.” She adds, “You can accomplish anything you put your mind to, regardless of your background or your current situation.” And finally, this Boerne resident confesses that she doesn’t have one favorite restaurant. Not surprisingly, she loves being outdoors “so I enjoy any place where I can eat outside.”